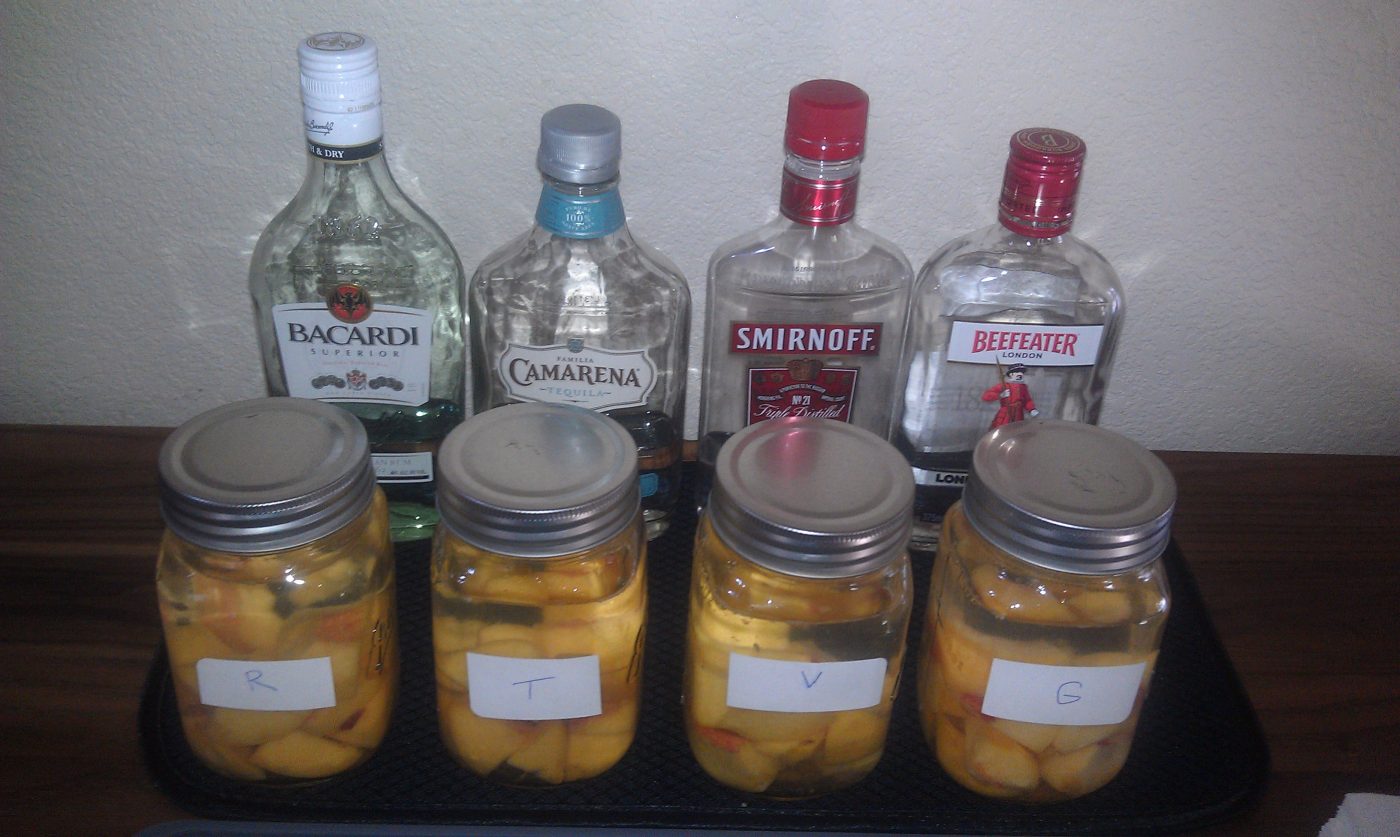 With all the success Will has had making infusions, I figured “how hard could it be,” and endeavored to do some tests with Colorado’s favorite fruit, the Palisade Peach. In particular I decided to try infusing several different base liquors with peaches at the height of the season (late August), when they are at their peak of juicy and tasty magic. 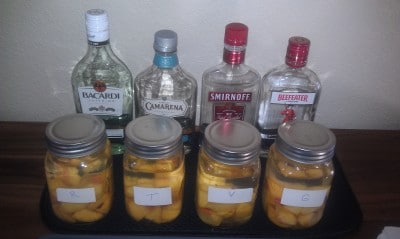 This is the infusion experiment after putting the peaches and liquor in the jars. 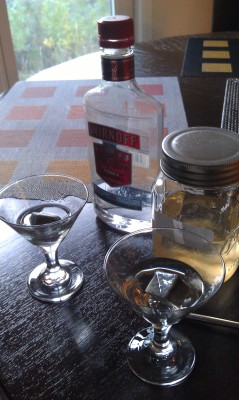 I thought a side-by-side comparison was a good idea. It really wasn’t.

Following the guidance on Will’s posts, I cut up the peaches and put them in each of four labeled Mason jars (which worked well), with Rum, Tequila, Vodka, and Gin. Note that I used well-quality liquor since I figured the infusion would overwhelm the fineness of more expensive brands. I let them infuse for 11 days, and filtered out the peaches using a funnel and some cheesecloth. So far, so good. My original plan was to do a taste comparison test just to see how they different from the original they tasted. I started with the vodka and immediately decided it was not really such a great idea. Even when chilled, it just tasted boozy. I also noticed that the peach flavor was not very strong, even in the vodka. 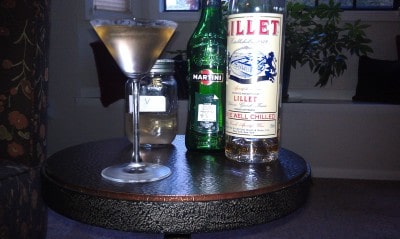 This simple cocktail with vodka, vermouth, and Lillet was drinkable but not amazing.

Then I realized the second of my errors. I had not really thought at all about what cocktails I would make with these infusions. I just thought it would be great to infuse with those wonderful peaches. I realized that I did not want to make strongly flavored cocktails, because it would overwhelm the peach. Simply drinking the infusions straight, but giving it a good shake to make it cold, was one option. This worked well for the rum and tequila, but not for the vodka or gin. Then I tried a martini-like cocktail with the vodka. It was ok, but not wonderful. 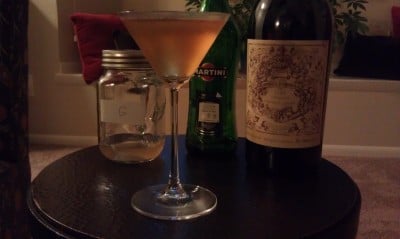 This Perfect Martini using the peach-infused gin was very good. 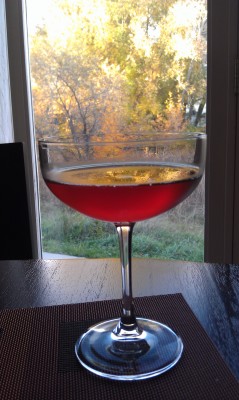 The Zaza always needs a little something extra to make it interesting, and the peach infusion did the trick.

After trying the rum straight and enjoying it, I made a daiquiri using the peach infusion. That was pretty nice. The peach flavor was only barely noticeable, but that’s ok, it did have that “synthesis” feel to it. I also tried a perfect Martini with the gin (very good) and then most recently, a Zaza (a.k.a., the Queen’s Cocktail). That was a terrific use for it, as it is a cocktail that needs some extra twist to be really good.

So, a summary of the lessons I learned:

I wonder if the biggest ‘mistake’ was not adding sugar. I think it may be indicative that you liked the rum (lots of sugar) better than the others. The alcohol may pull out flavor better than sugar, and the successful pineapple is just way sweeter than peaches. All recipes for homemade fruit liqueurs involve tons and tons of sugar, way too much imho. I’m writing this while trying to enjoy my own cranberry vodka, and it required adding sweeter booze.

Also, I think you need to use something nicer than Smirnoff. The flavor of the fruit didn’t overwhelm its level of nasty (although by letting things sit long enough, I believe I’ve noticed the fruit filtering the booze, and absorbing a good deal of the cheap-liquor taste).

Here’s what I”m drinking, since I’m pretty happy with it. I’m calling it the Spinster Belle (since it’s sour, bitter, and Southern).

Not for the faint of heart; to be sipped.

It had never occurred to me to add sugar, but that sure is an interesting idea. And oddly, I tasted the peach flavor the other day in a cocktail that used the peach-infused rum, and it had Cynar in it, which should have overwhelmed the peach. Perhaps the problem is my taste buds.