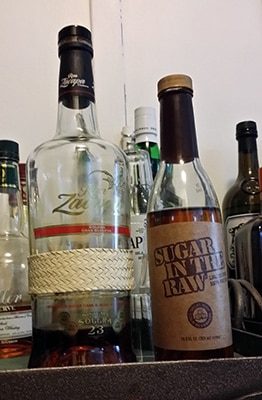 Simply put, this is a “Dark Daiquiri,” portmanteaud for sake of simpler reference. I can’t claim credit for the daiquiri nor a daiquiri made with dark rum. About the only thing I can take credit for here is a specific ratio of specific daiquiri ingredients, that make for a fantastic drink (IMNSHO). 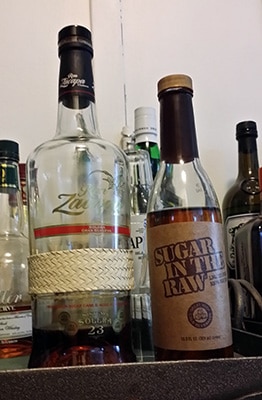 The genesis of this experiment was my discovery of Zacapa 23 rum courtesy of the exceptional bartenders at Tavern Road. I’m not historically “a rum guy,” and this stuff has just impressed the heck out of me. I’ll drink it neat or with a rock sometimes – never mind mixing it. In an effort to enjoy the rum more, I wanted to play with other rum-based mixed drinks, and once you remove Coke from the equation (gross!), the daiquiri is probably the most popular option.

The daiquiri is a simple drink, and the Darquiri is no less so. The Zacapa 23 baselines the ‘darkness’ of the drink, and I insist on using a darker sweetener than standard simple syrup. To wit, The good people who make the “Sugar in the Raw” turbinado sugar packets also make a liquid version of the same – also contributing to the ‘dark’. Lime juice is lime juice, of course. Use good limes, as always. Keep in mind as you read the proportioning details below, that those proportions were for these specific ingredients. Use a different rum or a different sweetener and YMMV.

The standard (to the extent such a thing exists) ratio for a daiquiri is 8:2:1 rum, lime juice, and sweetener (simple syrup). This is referred to as the Embury ratio, as Señor Jilk pointed out to me. However, I found this ratio to be unsatisfying and proceeded to tweak it. Dave suggested an 8:3:2 ratio instead and that created a notably more interesting drink. That said, it still seemed to be a tad too sweet for me. Zacapa 23 is not a run-of-the-mill rum. Side-by-side with whatever bottle of Bacardi you might have in your bar, there’s no real comparison. The Zacapa is rich, flavorful, and – and this is the key bit – sweet. Because the Zacapa has its own sweetness, and because its sweetness is complex and interesting as part of the rum, and because no simple syrup (regardless of its source ingredients) is that interestingly complex, I opted to pull back the sweetening of the drink from 8:3:2 to 8:3:1, at which point I thought the balance was nailed and the lime juice and the rum ‘popped’, becoming super crisp and awfully yummy!

For the avoidance of doubt, the instructions for creating a Darquiri are straightforward and do not deviate from the standard daiquiri: mix the rum, sweetener, and lime juice in a shaker with ice. Shake like the dickens. Strain into a frozen martini glass. I like to garnish The Darquiri with a thin slice of fresh lime that I run along the rim first.

Don’t pay for expensive Sugar in the Raw Syrup!

Just like a regular simple syrup: Put 1 part Sugar in the Raw and one part water in a saucepan. Bring to a boil, then take off the heat and allow to cool before using.

LOVE the name of your blog1