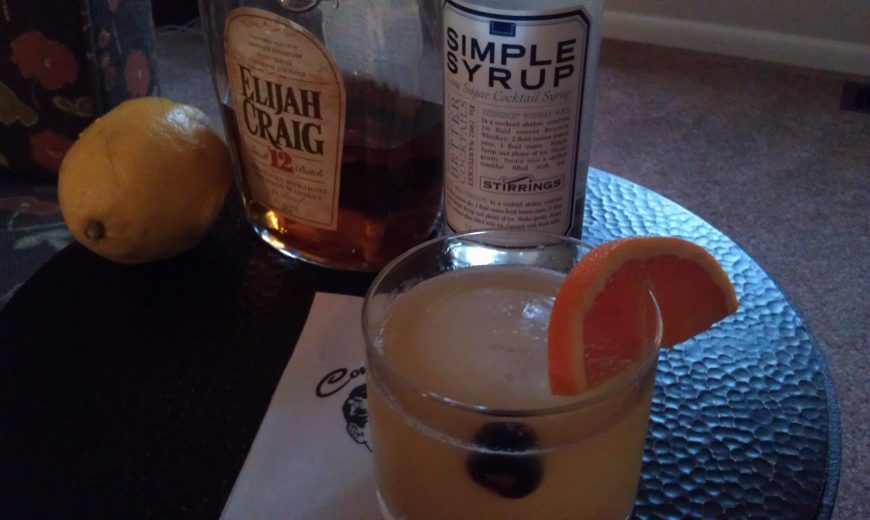 There are five distinct components of the sense of taste: sweet, sour, salty, bitter, and savory. The cocktail repertoire covers all of these in various ways. Today we’re going to talk about sours and, in particular, the Whiskey sour. The Sour family is actually slightly misnamed, since the drinks generally include a sweetener to offset the sour flavor of lemon or lime juice. A Gimlet (gin and lime juice) or a Rickey (gin, lime juice, and sparkling water) would be examples of true sour-only drinks. It is also common for Sours to include a bit of egg white, which not only thickens the cocktail but adds a savory element. They can be served straight up or on the rocks, but they are not topped off with sparkling water to make a highball – that turns it into a Collins.

So much for self-documenting drink names.

Besides the Whiskey Sour, other members of this family include the White Lady, Daiquiri, Sidecar, and Margarita, not to mention the Gin Sour, Brandy Sour, and Pisco Sour. As with three-ingredient cocktails, combinatorics provide us with vast possibilities. The recipe template is:

For the Whiskey Sour, the International Bartenders Association (IBA) recommends this recipe:

Pour ingredients in a shaker and either serve on the rocks in an Old Fashioned glass or up in a cocktail glass. The standard garnish is a half-circle of orange and a maraschino cherry.

I used Elijah Craig Bourbon, which worked nicely, and of course the lemon juice was fresh-squeezed, which is not optional. I served it on the rocks using an ice orb. This is a very different drink than the whiskey sour you will get in a neighborhood bar – they will more than likely use a sour mix and make it a highball.

I have been slowly acquiring a taste for more sour flavors, and I definitely enjoyed this at the standard proportions. However, if you search around the web you will find great variation in the quantities, particularly the ratio of sugar to lemon juice. There is no shame in making it a little sweeter. 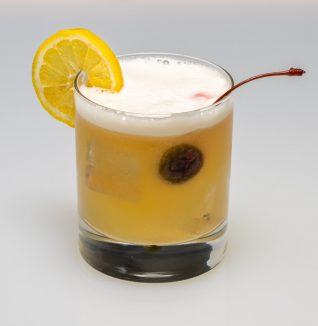 A real whiskey sour should have egg whites