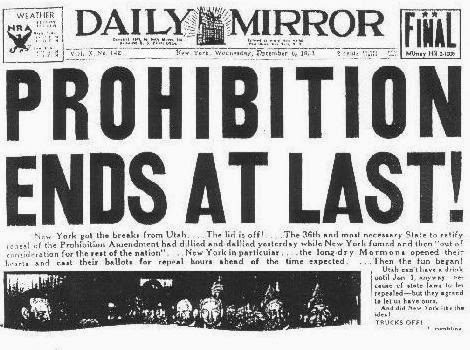 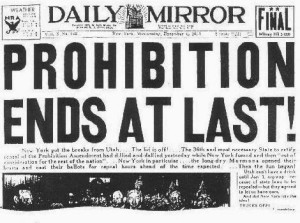 The Eighteenth Amendment to the US Constitution, banning the production, transport and sale (but not the private consumption or ownership) of alcoholic beverages was ratified by the requisite 3/4ths of the then 48 states on January 16, 1919. Eventually, all states save Connecticut and Rhode Island ratified the Amendment. Who would have thought that the hold-outs would be in New England?

In October of 1919, Congress enacted the Volstead Act – the enabling legislation for the Amendment – which specified which liquors were prohibited and how the Amendment would be enforced. The Act also specified that prohibition (as well as, perhaps, the greatest black market in human history) would officially start on January 17, 1920.

After 13 long years that saw courts full of people accused of breaking the new law and jails overcrowded by those convicted of the same, the Twenty First Amendment to the Constitution was repealed. Congress proposed the repeal in February of 1933 and it was ratified by the 36th state on December 5, 1933, 80 years ago today. Effectively, the Twenty First Amendment just repealed federal Prohibition. As part of the new Amendment, the right to prohibit the sale or transport of alcohol was explicitly passed to the states. Many states didn’t just turn on the taps that day. Some took years others, decades to allow the sale or public consumption of alcohol.

Today, we should all toast to the repeal of the only Amendment to ever be repealed and celebrate the fact that none of this happened during most of our lifetimes.