The GlenDronach Revival 15 Year Old was named “Best in Show Whiskey” out of the 3,000 whisk[e]y submissions offered up from around the globe at this year’s San Francisco World Spirits Competition. The 2018 release was awarded the highest possible recognition of Double Gold at the competition. FWIW, a scotch whisky is almost always recognized in the “Best Whiskey” category. That scotch is, generally, from Scotland.

Apparently, the GlenDronach 15 Year Old is matured in Pedro Ximenez and Oloroso Sherry casks creating “a rich, luxurious, heavily sherried single malt packed with sumptuous dark fruit, chocolate, honey, and spice.” Pedro Ximenez is a very dark and sweet sherry. You can almost imagine how the sherry impacts the taste of the whisky. Sounds great. Of course, you’d probably drink this stuff neat, but it might be interested in a whisky-forward cocktail too.

Also of note, like most best in show winners, none of us will ever get to taste it. 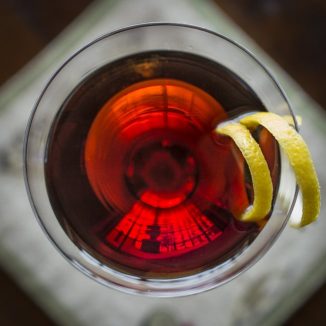