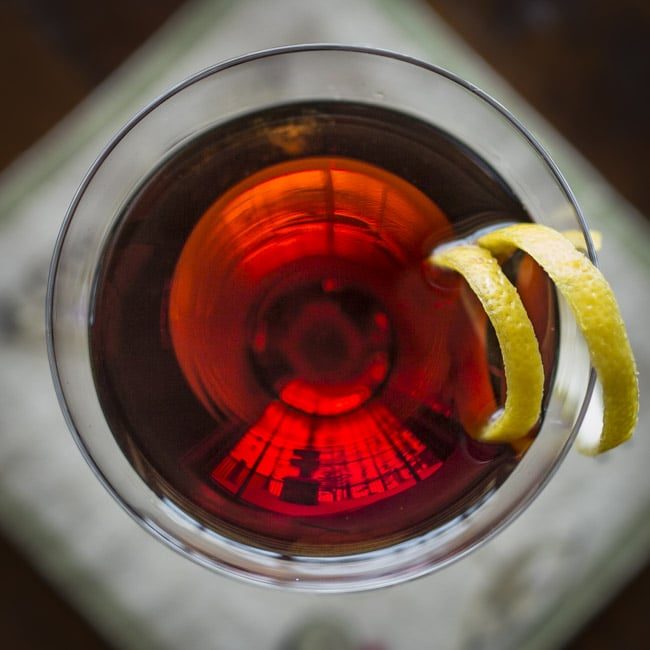 Sometimes, drinks taste better in my imagination than they do once I make them. This was true for this drink when I started. While making some cocktails the other night, I thought it would be interesting to combine a smooth and balanced Rye drink with the strong peat smoked taste and smell of an Islay Scotch whisky. My first attempt was with a 50:50 mixture of the Rye and Scotch to which I added both bitter and sweet – Amaro and Sweet Vermouth. It was the kind of drink that made my head snap back from the shock of the cacophony of tastes. I decreased the amount of Scotch over a couple of iterations until I realized that a wash – just having enough Scotch to coat the glass – was all I needed. It turns out that like an Absinthe wash, the peaty Scotch adds a boatload of character to the drink. 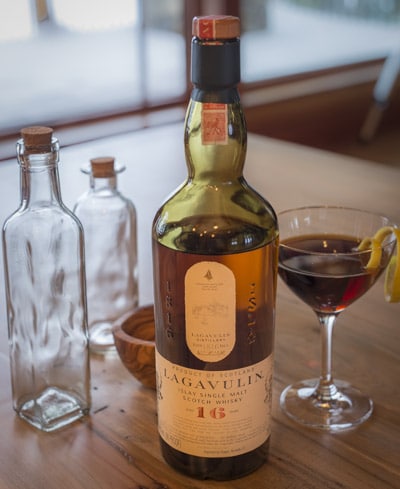 As you can imagine, you shouldn’t bother doing an Islay Scotch wash with just any drink. It’s powerful. You need a drink that stands on its own in the first place. Rye, even an 80 proof variety, stands up nicely. In this drink, the amaro and vermouth are also strong contenders to dominate the taste. None of them win. It’s the mixture that comes out. In my opinion, the sign of a good cocktail. The fragrance of the Scotch is immediately smelled long before you get any of the liquid into your mouth. It adds a little punch to the drink, but it’s the smell that mostly influences the taste. This is not a subtle drink, but it is mellow and delicious.

I had intended to use Laphroaig, my go-to peaty, Islay Scotch, but I was out. I found a bottle of Lagavulen in my cabinet and used that instead. Normally, I wouldn’t mix with a 16 year old bottle of scotch, but it’s only a wash, after all. You might also want to try Peat Monster Scotch, which has become widely available.

Put some ice in the serving glass – a cocktail glass or coupe – it’s best to chill the glass that you’re going to wash. While the glass is chilling, measure out all the other ingredients and pour them into an ice-filled mixing glass. Stir until cold. Set the mixing glass aside and empty the ice from the serving glass. Pour a small amount of Scotch in the glass and rotate the glass in order to coat its sides. Pour out any remaining Scotch. Empty the contents of the shaker into the glass and garnish with the lemon peel.

This is a strong drink that can be enjoyed with hearty food or in front of the fire. The flavors are terrific and unambiguous. The smoky Scotch highlights the tastes of the other spirits making it a well-rounded drink that you can sip and enjoy for a while.

The peaty Scotch wash can be used in other drinks too, of course. Give ’em a try and report back. I’m sure there are some great combinations to be discovered. 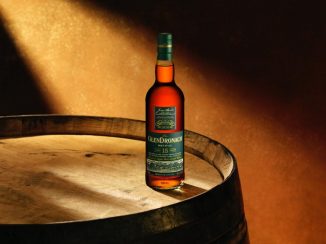 Sounds delicious – what lead to your choice to shake instead of stir? Normally for a drink without citrus stirring would be preferred. Thanks!

Jamie, that’s a great question and you’re right, without egg or citrus, one would normally stir. This drink should be stirred. I chose to shake because I was on a roll photographing and I didn’t even think about it. My bad. I will update the post to reflect that. Thanks for asking!

Enthralled by the idea of using a peaty scotch as a wash and my mind is now racing through all of my favorite rye and bourbon cocktails. Game-changer for sure.

Sarah, please report back on what you concoct. I’ve been playing around with other combos as well. A very different twist. Thanks for the comment.

So after much playing around, our favorite concoction showcasing your peat wash was a cocktail with white whiskey, madeira and a little angostura topped with a beer foam. We are dubbing it The Henchman. The rinse really elevates all of the other components.

Sarah, that drink is wild! Thanks for reporting back on your excellent new concoction. We’ll give it a try!

This is excellent! Thanks for mentioning it the other night. Definitely thinking about how to work bourbon into the mix instead of rye (as you might imagine). I washed with Lag 10. The peat slams your nose and then you get hit with the sweetness of the Averna and Carpano – but the rye holds it all together to finish it up super-nicely. Very unexpected! The peatier the better in this case IMO.