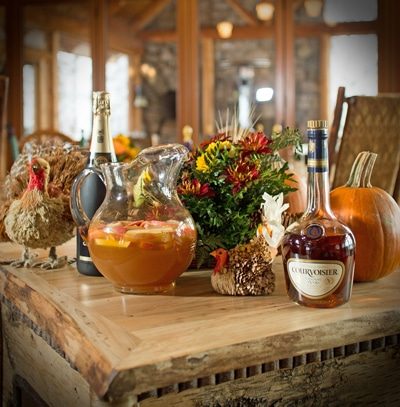 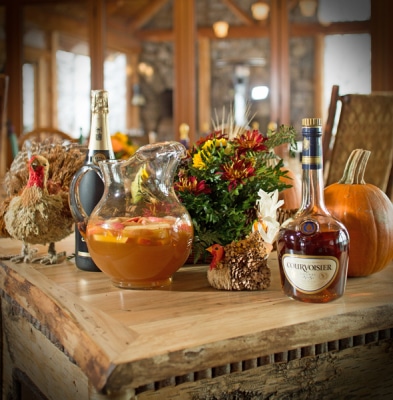 Yeah, we know. Why didn’t we tell you about this a few days ago? It turns out that we were enjoying this punch so much, typing became difficult. This punch is easy to make and, as test results from Thanksgiving indicate, enjoyed by all. Even those who don’t usually partake in Thanksgiving cheer. If you know what I mean . . .

The punch is dominated by the apple cider that is its main ingredient, but it’s balanced with the brandy and cava/prosecco/champagne or other sparkling white wine that you choose. The flavors of the wine and spirits are nicely balanced and the added fruit and spices give it a real holiday feel. This is certainly a good punch for Christmas as well. Or, for that matter, celebrating any Wednesday or a new episode of your favorite television show.

Core the apples and dice into matchstick style pieces. This is an aesthetic choice. If you like cubes, thin slices or origami-apple doves, go for it.

Place the apple in a pitcher and add the cranberries. Then add the cider, brandy and the bottle of bubbly. Throw in a handful of ice cubes for good measure and stir.

Finally, grate the nutmeg into the pitcher – a little goes a long way – and add a few pinches of cinnamon to the punch and stir again. You’re ready to go.

Why You’ll Like Thanksgiving Apple Cider Brandy Punch
This is a tasty punch that works for many people. It’s not overly boozy and doesn’t have the impact of the red wine-based punches which are much more common. Still, it’s delicious, not too sweet and exudes the smells of the season. As an added plus, it’s super esy to make. Maybe 10 minutes, including the dissection of the apples.

You may want to double-down on the Brandy and try this with Calvados or Laird’s Apple Brandy instead.

Be prepared with extra apples and sparkling wine, this stuff will go fast.

Note: this is far from a Consumatorium original. It’s our take on many of the lighter holiday punch recipes that can be found on the ‘net.

Oh, this apple cider brandy punch is magnificent, and if you've never tasted this punch, I highly recommend that you make this punch right now, and have a shot of it. You'll enjoy it a lot, I guarantee you!