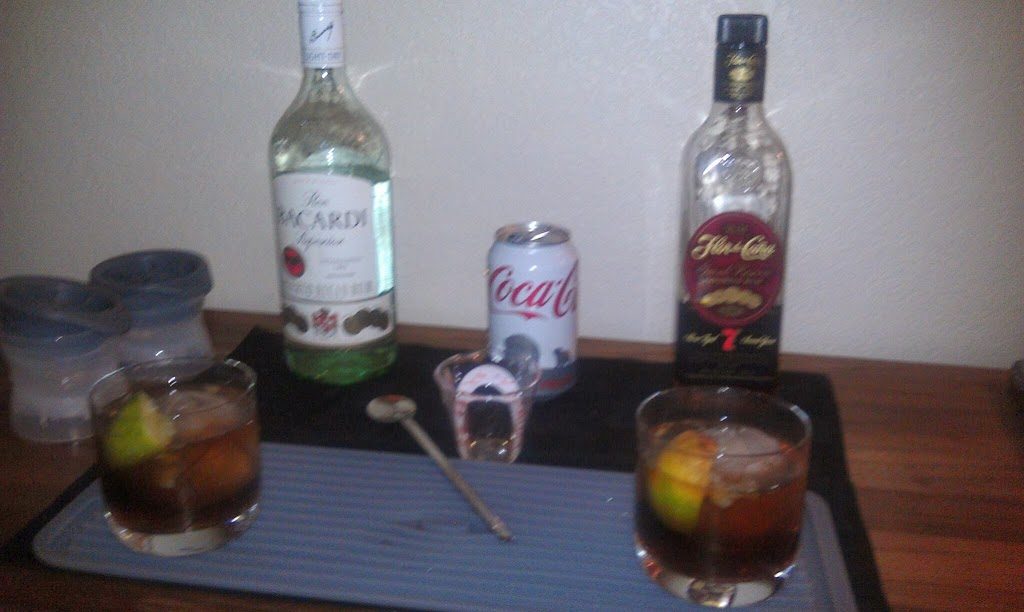 As part of our Classics series, I recently tried the Cuba Libre, an ancestor of the Rum & Coke likely invented in very early 20th century Havana as a way to promote Bacardi. I have to admit, this is not my favorite highball. Maybe it’s that I don’t usually drink soda pop in the evening; in any case, read on, for you may enjoy it.

My first experiment, about a month ago, was a complete failure. 2 oz Rum, juice of one lime, fill with Coke. Those of you who are paying attention know that I like my lime and lemon in subtle quantities – this was anything but. I may have even thrown the drink out before I was done, a rarity for me.

My second experiment, shown in the first photo below, involved something closer to the standard IBA ratios, about a 2.5:1 ratio of Coke to rum, just a squeeze of a quarter lime, and two different kinds of rum. I used large ice orbs instead of small cubes. This was much better, and really tasted like a regular rum and coke with a little flavor twist. Interestingly, I noticed virtually no difference between the Bacardi and the Flor de Cana – the latter may have been slightly smoother, but really the Coke just dominates this drink, and though I dutifully drank both, I didn’t love it.

Finally, I visited my dad last week and I knew that his favorite cocktail is the Captain & Coke, using Captain Morgan rum. I thought I’d try to persuade him to put a little lime juice in, but he had that completely covered. It turns out that you can still buy Diet Coke with Lime, and that’s what he uses for a mixer. He uses a very light ratio, I’m guessing a shot or shot and a half of the Captain Morgan and probably six ounces of the Lime Coke, all served in a highball glass with ice. Also, and I think this is quite important, we consumed these at about 4pm after a fine round of golf. In other words, much earlier than I would normally have a cocktail.

This was much more enjoyable. It tasted like a better version of Coke, rather than a worse version of rum. Furthermore, the spice in the Captain Morgan was noticeable and made the drink actually interesting. The ingredients are pictured below, along with a picture of the result and Dave Senior, because if you can’t put your dad on your cocktail blog, what have you really accomplished? Here’s what I’d recommend for the serious home bartender, though I have not tried this exact combination:

No later than 4pm, fill a highball glass with ice. Pour in the rum and the Coke, squeeze the lime wedge into the drink, and stir. Drop the remainder of the lime in as a garnish. Raise your glass and say “Cuba Libre!” before you drink. 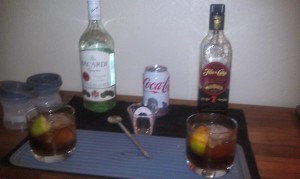 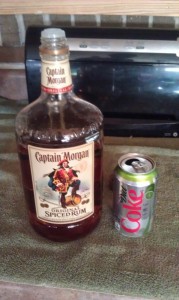 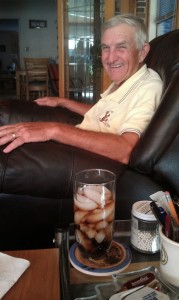