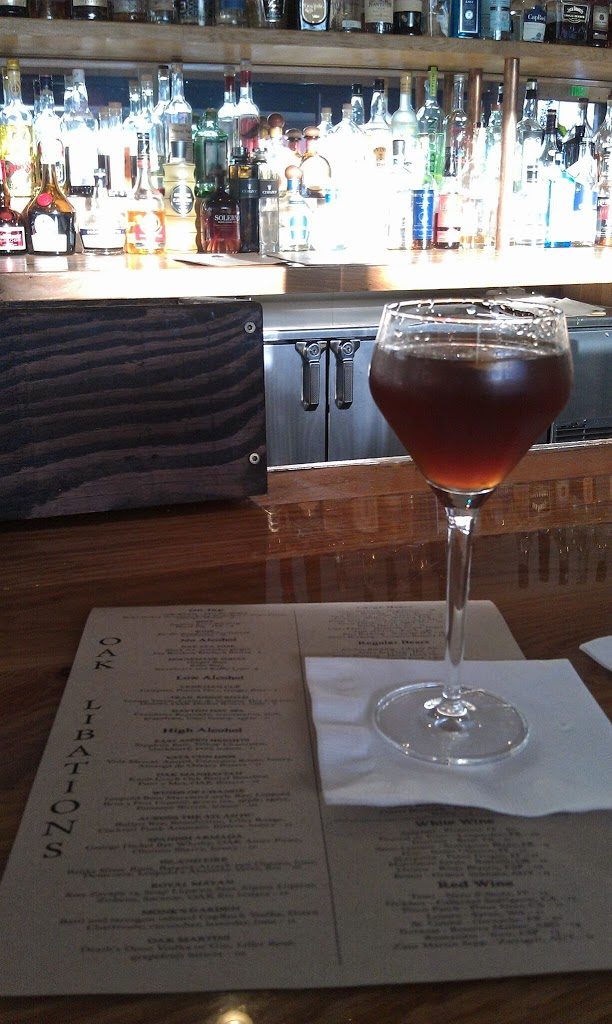 Last night, I and two faithful Consumatorium readers, Bill and Seth, went to OAK at Fourteenth to sample their cocktails and cocktail experience. I’m hoping to make this into a series, covering the large and statistically unlikely number of excellent bars in Boulder.

I arrived at 5pm, and the bar and restaurant were largely empty. Not everyone’s cup of tea, but it enabled me to get to know the bartender, Glenn, a bit before the others arrived. Glenn served me a Spanish Armada, a terrific twist on the Brooklyn, and pictured below. We discussed ingredients, criteria for a good cocktail, liquor industry politics, and the difference between a bartender and a mixologist. Glenn knows his stuff, and was happy to share it, so I learned a bunch. For example, I found out that the brothers who separately founded St Germain and Domaine de Canton do not get along very well, and stores/bars are not supposed to display the products together.

Bill and Seth arrived, and I asked that at least one of them order a classic cocktail. Bill complied with a Vodka Martini, but it turned out to be an Oak variation, with Death’s Door (Wisconsin) vodka and Lillet instead of vermouth, at a 2:1 ratio, garnished with grapefruit bitters. Really more of a cocktail than a true Martini. Bill enjoyed the drink, though it was a little sweet, masking the taste of the vodka but leaving a hint of the Lillet.

Seth loves to order the strangest cocktail on the menu, so he picked the Monk’s Garden, a highball combination of herb-infused vodka, green chartreuse, cucumber, lime, and lavender. He gushed with superlatives about this drink. He said “The mild sweetening, presumably in the infused vodka, was key. The infusion of basil and tarragon made basil the dominant herb, above the variety in the chartreuse.” We all sampled it and agreed that, first of all, it sounded strange and both tasted and looked great; and also that it was very refreshing and is really more of a spring/summer cocktail.

The restaurant and bar were starting to get busy around 6pm when we ordered the second round. The place has a nice energy and its not only attractive inside but also has great afternoon sunshine in the west-facing windows. For the second round, Bill asked for a gin version with a different ratio; I requested a classic Brooklyn, and Seth picked out the second strangest cocktail on the menu,the East Aspen Heights.

My Brooklyn was much less sweet than the Spanish Armada, due to the latter having a touch of honey. I asked for Whistle Pig Rye, which they did not have, so we went with the Bulleit. OAK makes their own version of Amer Picon, a nice touch if a little overkill. The Brooklyn was true to form and very solid, but I have to admit I enjoyed the Spanish Armada more.

Bill had this to say about his second cocktail, which was a modified Oak martini using Deaths Door Gin at a 4:1 ratio to the Lillet Blanc: “This turned out a much more refreshing if still flavorful (not subtle) martini. The grapefruit bitters was actually a very nice touch and worked with the citrus/fennel notes from the gin. My advice would be to keep the ratio at 4:1 (or possibly increase to 5 or 6:1) as the flavors get more complex as the primary ingredients (gin) shine through.”

Seth’s cocktail was a frightening dark red color, combining Sapphire East gin, yellow chartreuse, and blackberry, pear, and lemon juices. He found it extremely flavorful, fruity rather than herbal and “less striking” in comparison to the first round. It was nevertheless quite tasty, and again we all agreed that it too would be a refreshing spring or summer beverage.

By this time we were pretty tipsy and no further cocktail analysis ensued. My conclusion is that OAK at Fourteenth is a terrific place to have an after-work cocktail, with bartenders who are extremely knowledgeable and talented but not at all pretentious. They can deliver a solid classic cocktail, but you need to be clear that is what you are seeking, as they gravitate toward their own variations. My recommendation would be to go with their variations and live a little, or better yet, just order off their specialty menu. 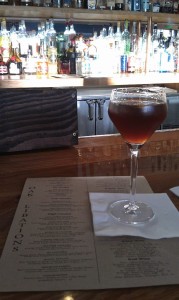