Dave posted a while back about Amaro Montenegro, which is quite good. We’ve also posted about several other Amari (plural for Amaro) used in mixed drinks. I thought it would be a good idea to taste test a selection of Amari back-to-back to answer the age old questions of which one is best and whether or not I actually need 3, 5 or even 8 different bottles of Amari in my bar. OK, the question is hardly age-old – I just thought of it yesterday – I think it remains a question that’s dying to be answered, though.

Amari (Italian for “bitter”) are herbal liquors that are traditionally used as digestifs (French) or digestivi (Italian) – served after a meal to aid in digestion. They’ve become more popular recently as a mixer in cocktails. For the most part, their initial taste is sweet with a bitter aftertaste that lasts on the tongue. Bitter is the key here though, you won’t be using these to sweeten your drinks.

For this taste test, I used:

I’m going to add one more to the list although it, again, is not an official Amaro. Pimm’s No. 1. Not as bitter as many of the others and not as sweet on initial taste. Pimm’s is also an herbal digestivo, but it’s based on gin. While there probably aren’t 100s of drinks that you can use this with, it does add an option for toning down a drink that’s too sweet without overpowering it. 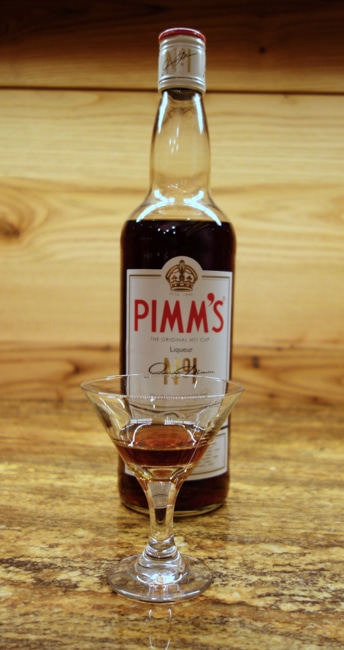 What an amazingly great review!

Just a few thoughts to add:
– It’s too bad you couldn’t get your hands on some Amer Picon, which apparently was the favorite 100 years ago and was the original ingredient in the Brooklyn cocktail.
– I find the Cynar and Campari to be pretty comparable – you might try making a Negroni with the Cynar and see how you like it.

While I appreciate you doing all this work, I think I may want to answer the age-old question for myself 😉

I’m having an Amaro renaissance & discovered your post. Thank you!

Thanks, Jemma and good luck on your Amaro discovery. Please report back what you find!

I bought a bottle of Amaro Ciociaro this week and we tried it last night in comparison with Amaro Averna – just sipping it straight, after dinner. It has a much “sharper” flavor in comparison with Averna’s super-smooth taste, and it also has a different after-taste that does not kick in until several seconds later. It is not as “chocolatey,” which can be a benefit in mixed drinks, as I find that Averna heaviness sometimes is too noticeable in a cocktail (that’s why I like the Ramazotti). It probably will not be my preference for a digestif, but I think it will go well in cocktails – I will be mixing it and will report back. The Ciociaro is considerably less expensive than the others, so if it works in the cocktails it’s a good option for the starter bar.

Dave – check out Nardini Amaro: http://www.nardini.it/amaro-nardini-eng.html . Will wasn’t wow’d by it, but I’m a huge fan. I drink it straight as an apéritif or digestif.

I have quite a bit of experience with a wide array of amaros and Campari has always been referred to as such in my circles. Where do you get the info that it’s not an amaro? Also, as someone who really loves amaros I’m not wild about Aperol though it works fine to round out certain cocktails. In use, in my opinion, it is a bit like the TANG of amaros 😉 Doesn’t have any of the sincere herbal punch, complexity, strength, or history that the other standards do. It’s a newer invention on the market by comparison to many and usually used in spritzers. I am a girl… but it’s one bar component that personally feels too girly for me! I’ll never buy another bottle.

Hey Liz, thanks for the comment! Campari isn’t considered an amaro by many because it’s marketed as an aperitif, not a digestif like most amari. But, like I said in the text, I have no idea why it’s not in the amari category. I agree with you, it totally fits the bill.

I mix with Aperol once in a while. As you say, it doesn’t have the punch that other amari have, yet I still like it for the bittersweet taste it can bring to a drink. Recently, I’ve been playing with it in tiki drinks. It brings a really unique taster to them. It, too, fits in the amari category like Campari, IMO, but, as you say, it’s a lightweight.

I make my version of an ‘old fashioned’ using one oz. of my homemade simple syrup {using 3tbsp brown sugar, one cup sucralose Splenda type sweetener and 1 1/3 c water brought to a boil} , 1oz. Averna Amari, 2 oz. Knob Creek small batch (infused with Community dark coffee), 1/4 tsp orange zest, several shakes of orange bitters on ice muddled in an old fashioned glass with minimal ice. This is an awesome combination I think I’ll stay with for life. I do the coffee infusion of the Knob Creek by just filling a Keurig mesh filter cup (for loose coffee) with the Community dark roast and lowering it into about 6 oz. bourbon for about 45 minutes at the least. Just a PERFECT flavor blend. Then, in the morning, use the Keurig filter cup that is now infused with bourbon for a fantastic coffee.

Mark, that is EXCELLENT! I totally get the coffee infusion part. Coffee is a complimentary taste. Why do you add Splenda? Low cal or do you prefer the taste? Thanks for the comment.